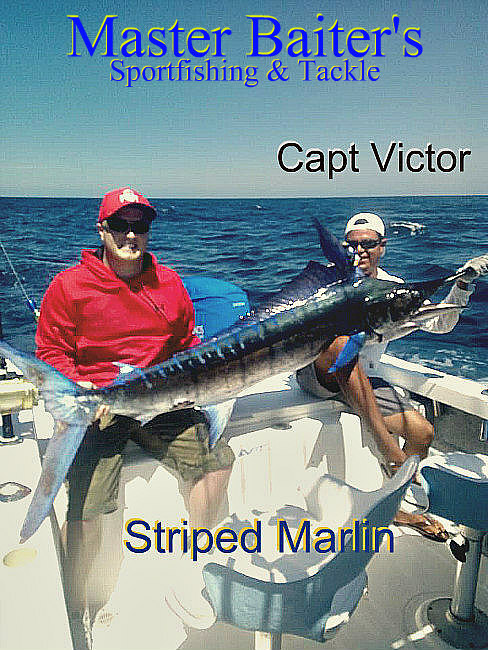 When we come into this time of the year, fishing can be up and down and that’s a bit of an understatement for the moment. Species are moving in and out, water is mostly blue but there are some green water, or cold water spots still in the area. So we’re still on a water temperature rollercoaster. With huge amounts of varied bait out there at times it can be hard to turn their heads. That all sounds pretty negative, but in reality it’s normal and we’re inching our way into what may be a great fishing season. If interested in the Tres Maria Islands Yellowfin Tuna are on tap! World class fishing in Puerto Vallarta continues!

Right now it’s pretty much a mixed bag out there. We all know fish move and will mostly follow currents and bait migrations. For now we have changing currents as is normal for this time of the year. This means one day there are cold currents and then you see things like Red Crabs, Squid and Sardines move in. Then you’ll have a warmer current, this may bring Marlin, Sailfish or hopefully Yellowfin Tuna. So when you consider fishing in Puerto Vallarta you have to keep the local conditions when reserving in the back of your mind. I talk a lot about water conditions, Blue water is good, Dirty water is bad. But what is Green water? Green water is cold water, but not dirty water. Fish don’t like green water, but will spend some time in it if it’s full of bait. Green water is something you see in transitions seasons. Dirty water comes with clashing currents. For now we’re somewhere in between. So the Species moving in and out will vary, so for now, it’s a mixed Bag.

Corbetena this week is still a tick or two slower than we’d like. But that doesn’t mean the fishing is bad, it just means the fish are spread out. I don’t care what area or fishing grounds you choose, fishing in Puerto Vallarta right now is pretty much the same in all the deep water locations. For now as an example, where two weeks ago El Banco was running big Black Marlin, now it’s as close to dead and it gets. Corbetena is still the place to be, but you have to be running baits in the North Corbetena area. There you’ll find Spinner Dolphin running with 20 to 40 lb Yellowfin Tuna. Sailfish are in the area, but the numbers are sickly. Stripes are also in the area, but they’re not automatic. Just circling the rock is not going to cut it for now. For those looking for Blue Marlin, this is where you want to go. But to be straight up Blue Marlin moved in, then moved out for the most part. Disappointing yes, but it’s normal in this time of the year.

El Morro to Punta Mita is still “active” but not exactly on fire. We’ve seen the Rooster fish that were taking Calamari last week diminish to small Rooster Fish in the 20 lb range. Sailfish and Striped marlin are anywhere from Corbetena to Punta Mita. Jack Crevalles are thinning in numbers, Bonito and larger Skip Jack Tuna in the 10 lb range are great bait, but also great eating. I eat the “bait” all the time, ja ja. With Sea Week all over the area, the possibility of Dorado are very strong. But be warned, trolling in Sea Week will foul your lines, so keep an eye on your baits. No real reports from Punta Mita this week, but with some luck you’ll still find rooster fish off Sayulita.

Inside the bay the action is surprisingly active. With the outside chance of a Sailfish around Los Arcos or Dorado, you could say the Bay has better action for the moment. This is nice since you can pay less for strong fishing action. Jack Crevalles are still in the bay around Nuevo Vallarta beaches and La Cruz. Dorado are still small, but there have been some boated at 25 lbs, feeling lucky? Larger “Skippies” aka Skip Jack Tuna are in the 10 lb range and that’s huge for this species. Bonito as well in the 15 to 20 lb range. Yellowfin Tuna could be around the Yelapa Area north, but you have to chum to bring them up. The fact is the action is the bay for a six hour trip is a sure bet for fun at bargain prices!

The bite is amazingly enough still between 09:30 to about 11:00. Having said that several people this week leaving the docks earlier have been getting great action early. So take this information and figure out a plan of attack. Water temperatures are still hovering about 78 degrees, but green water is at least five to eight degrees cooler and void of fish. We have many types of bait, but the dominant bait for now are Flying fish of seven inches, Red Tuna Crabs with soft shells are a fish delicacy. If running lures, Iguanas of green and yellow with black prints and Petroleros of Green, brown and purple are what you would want to start your day with and mix it up after that.

Until next week, don’t forget to Kiss Your Fish!